Most of my day sucked too much to discuss, involving a ton of cleaning and sorting and laundering though we won't even know until the pest control people come tomorrow whether we have an actual infestation or just some random bugs that need to be nipped in the bud. I get several days of going through everything I own that's made of fabric, even though we have not seen a single bug, larva, or egg anywhere today, and believe me we were checking. We did get a couple of estimates about how much it will cost to replace the living room carpet because although we have no reason to believe it's been infested, it is disgusting enough to rip out.

But all that is in the background now because the Capitals just won the Stanley Cup! It's true, I pay almost no attention to hockey most of the time, but I don't think niece could even name the teams involved yet she went with friends downtown to the mob party outside the Capital One Arena (which I think was still the MCI Center the last time I was inside it). It was lovely to see Ovechkin holding the Stanley Cup. And I will confess that, having seen their Renfaire/Medieval Times On Ice game introductions, I'd probably be a Golden Knights fan if they were competing against anyone else. Speaking of the last time I was in DC's arena, here are photos from 2004! 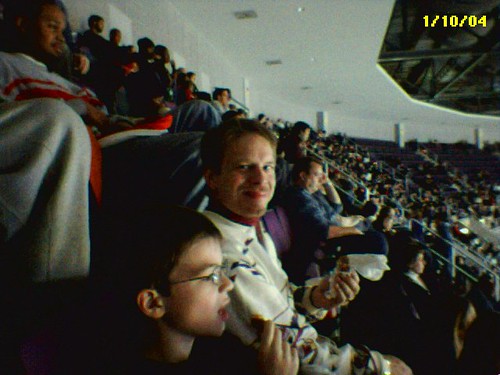