On Sunday we took the vast majority of Paul's comic book collection to the county recycling facility, along with years' worth of letters, cards, school papers, old calendars, and the like. (Since people scream when I tell them we destroyed books, I will add that they only could have been saved if we had enough space to leave them for heat fumigation or paid to have them frozen, neither of which made sense financially or in terms of trying to live our lives since we'd have had to take weeks to sort everything, and it's not like I'd take friends up on offers to use their dryers just in case there's any bugs in them, though we haven't seen a single one beyond our bedroom.) It was a revelation how many books people throw out/recycle! The county dump was a revelation -- I'd only ever been to the first part, where you leave computer parts and scrap metal -- I did not expect to see thousands of books, bins overflowing, a used bookstore's worth, all waiting to be pulped.

Right now we're watching Westworld's OMFG IS THAT THEIR IDEA OF A FATHER'S DAY EPISODE. I'm hoping I eventually experience the euphoria that people tell me decluttering brings, when I realize that we're out from under the burden of all this old crap and can pick up and move wherever we want. I thought my in-laws were insane when they sold all their stuff and spent two years driving around the country, but in the internet age that seems far more doable, since it's not like I could only talk to people in two-minute long distance phone calls, I could text and Facebook message from anywhere and it's not like I've ever been attached to this house as such. Younger son spent the weekend hiking in the mountains with visiting friends, and I am ready to move out west as soon as he takes a job there! Here are some photos from the Jurassic World exhibit at the Franklin Institute in Philadelphia, since we watched that movie with Cheryl to complete the cycle before Fallen Kingdom opens: 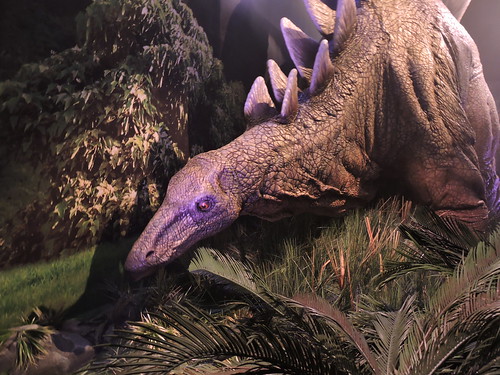