Let's stick with the good things. All my Barbies worth saving are safely in either my dresser or my linen closet, since we're throwing out a massive shitload of linens and have a metric fuckton of clothing sitting clean in bags in the basement. (The Harry Potter Legos and Lord of the Rings action figures under the bed are a total loss.) Paul has done the unthinkable and thrown out all his bootleg CDs of Grateful Dead concerts, since he has saved most of them as mp3s. We're down to two last major laundries to be done, six bedroom shelves to be emptied (and we have to deal with Daniel's room, since Maddy, who was supposed to have cleared out Sunday night, is currently up there asleep).

Oh wait -- good things! We took a break to watch the season finale of Supergirl, which was a lot better than I had dared to hope: they didn't kill the character I thought all season was a goner so another character could have an insta-family, they are apparently getting rid of my least favorite character without killing him off, and I still love Lena Luthor. And starting Thursday I can start selling my remaining crap, dumping more books, etc. We'd been talking about sinking some money into this house to fix things, and this has all been an ultimately beneficial reminder from above that we'd rather save the money and get our crap in order for when we're ready to move! 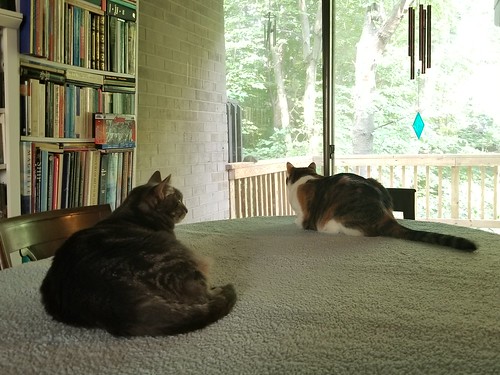