There may not be poems for a few days while I try to get my life and house back in order. We got up Thursday morning and tortured the cats by forcing them once again to get into carriers to be placed in the car, but then to their great relief we arrived at home, which is finally less than 120 degrees upstairs. I have only seen dead bugs, and only a few of those, but there is staining around one of the bedroom outlets indicating that they were probably hiding in there (I do not want to think about the fact that it backs up to our neighbor's bedroom in the adjoining townhouse, but will hope we put in enough diatomaceous earth).

I allowed myself to be distracted for an hour in the early evening because Pokemon Go got Regice raids and, much more importantly, launched its social function that allows friending, gifting, and trading, so I went to a raid and friended most of my local raiding group, plus some out-of-town friends who play. Late in the evening, we watched this week's episode of The Handmaid's Tale, which is both harrowing and devastating; even worse than the systematic rape storyline is the freakishly relevant characterization of what happens to children torn by the government from their parents. Herons from Huntley Meadows last summer: 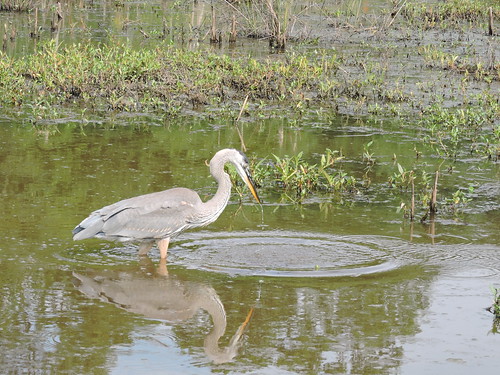