Adam had meetings on Friday but Daniel took the day off, so we picked him up in the morning and went to the Seattle Waterfront and Pike's Place Market, where the shops were crowded with tourists and the gum wall was as disgusting as previously reported, but we had a delicious lunch at the Alaskan Sourdough Bakery on Pier 57. Then we went to Carkeek Park, where we watched the freight trains from the beach and I got to wade in Puget Sound and see the snails and seabirds.

From there we visited the Country Village Shops in Bothell where Paul's aunt and uncle used to live, which now has a farmer's market in addition to all the craft stores and the chickens and ducks that live there. Then we drove to pick up Adam, who in turn drove us to Kirkland for dinner at George's (most of us had breakfast-for-dinner), and on the way back to his place, we stopped at Houghton Beach Park, so that's two beaches in one day for me! After we said goodnight to Adam, we went to Daniel's building and visited the store downstairs to get supplies for Saturday, then hung out at his apartment for a bit. Some pictures: 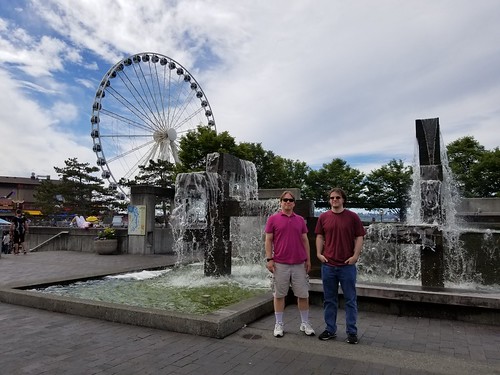