On Sunday we got up, picked up Daniel, and met Adam at the University of Washington, where many of his friends from Microsoft are staying for the summer (though his friend from home, Kevin, is staying with him while looking for housing for a Microsoft job starting in the fall). We went to Fremont to see the troll, the piece of the Berlin Wall, the Lenin statue, the rocket ship, the Center of the Universe and various other fun local sights before having lunch at Cafe Turko.

Then we drove to Golden Gardens Park, where the beach was crowded and there were lots of boats and people fishing on the pier. We stopped at Hot Cakes for lava cake in Ballard before visiting the locks and fish ladder, after which we hung out at Daniel's apartment for a while before going to meet Adam's girlfriend at BB's Teriyaki Grill near the university. After saying farewell to them, we went back again to Daniel's for a bit before decamping to a hotel near the airport. 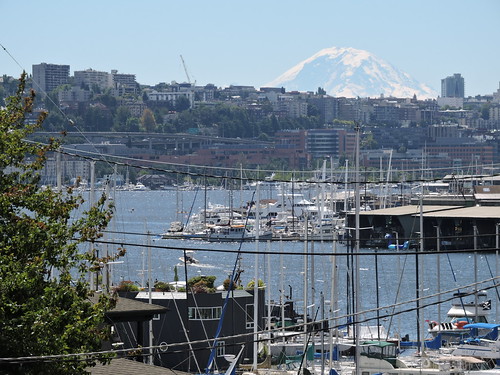