The bedbug exterminators returned on Thursday hopefully to murder every egg, nymph, and anything else that might still be alive in our bedroom. This time, to avoid traumatizing the cats any further (and to avoid spending even more than the fortune we've already spent dealing with this), we barricaded ourselves in the basement with the cats while the exterminators worked. It was, thankfully, cool, though our upstairs is still over 90 degrees so we have to sleep down here. The cats were initially distressed about being stuck in the basement along with pretty much everything we own stuffed in bags or piled in stacks, but eventually they all found places to sleep.

When finally we could leave the basement, we went out to dinner at Grand Fusion while the air conditioning started to work, then watched the last episode of A Very English Scandal and the first episode of Cloak and Dagger, both of which were quite enjoyable though I was quite distracted cleaning up the things we could get to -- we have weeks ahead of us of more cleanup. 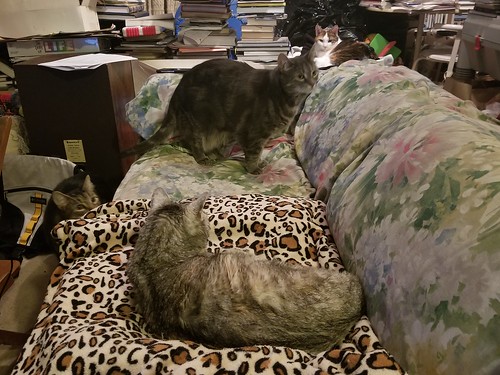