On Sunday we took a break for a few hours from putting our lives back in order and went on a long-overdue outing with Cheryl to see Ant-Man and the Wasp, which I loved for a long list of reasons, a few of which are 1) three kick-ass women, one-and-a-half of whom are actually in the title of the movie; 2) the fact that those women are smarter than their partners, who know it; 3) Michael Peña, who steals every scene he's in; 4) the fact that Scott is apparently in a threesome with his ex-wife and her new husband while he and Hope are on the outs; and 5) the fact that I predicted the plot as we walked out of the prequel, though HAHAHAHA OH DEAR that ending.

Since we had met in Fairfax at the Angelika Film Center in the awesome Mosaic District which we had never visited before, so Cheryl did not have to drive all the way to Bethesda in miserable 95 traffic, we stopped in a couple of the artsy stores there before going to dinner at Four Sisters, a Vietnamese restaurant that had received excellent reviews, where we shared caramelized tofu, a wide noodle dish, and a curry-and-eggplant stew, all of which were great. We had planned to go see the Capitol Steps at Mason District Park too, but it started to pour, Fairfax County canceled the show, and we got home as the lightning began in earnest. From Seattle's Carkeek park, wildlife by the train tracks: 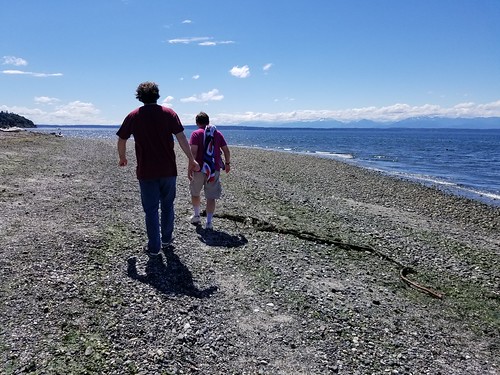