On Monday I was back to being boring -- I hung up hooks in my closet from which to hang my scarves, I folded a lot of shirts and sorted a bunch to give away, I paired up what seemed like six hundred socks and pondered how many socks one person really needs (because of course I need all eight Avengers pairs and the three DC pairs and six pairs with cats and enough Halloween socks for two weeks in October). I tried to get bagels but someone had bought all the pumpernickel and sesame before I got there and there was only one rye. At least Giant had spicy pepper cheese.

At least I now have an Alolan Marowak and a Registeel on both accounts. We spent the evening sorting stuff while watching Versailles, which is gloriously mindless escapism featuring the men with the best hair on television, and Elementary, which is less mindless and has less glorious hair but has Lucy Liu being brilliant and if they're doing this storyline with Marcus because they feel like killing him off rather than to give him his own story arc, I will be furious. From Seattle Center's Neototems Children's Garden, Gloria Bornstein's sea creatures and a flying pig: 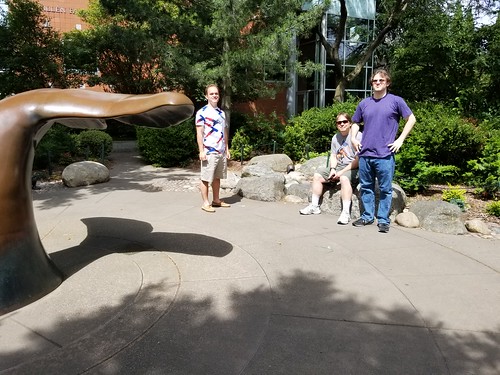