I had a bunch of shopping to do on Rockville Pike on Tuesday, which was fine because I really needed to get out of the house even though a lot of work there was not done. I got thrilling things like a step stool at the Container Store and a cat blanket at Tuesday Morning, but I also had lunch at Lebanese Taverna since I was there (and I may have stopped in the Hallmark store for this year's Snape/Harry holiday ornament, which of course I will not be using on a tree but just listening to Alan Rickman talk when I press the button). I stopped in Cabin John Park because there were three Registeel raids right next to each other, and I got all my t-shirts sorted and put away, so the bedroom is more or less reconstructed, with a number of deletions.

We watched this week's The 100 (and I'm actually surprised it took this long to get to cannibalism, but it was pretty badly written, like the only way they could come up with to redeem Octavia was this, so not impressive). Then we started watching Ekaterina, the Russian-made Catherine the Great miniseries, but it was heavy-handed and we didn't feel like dealing with subtitles. So because I was feeling mindless, we actually started watching the terrible recent Baywatch movie, then Paul's brother Jon called so we turned it off. Do The Rock and Zac Efron fall in love? Here are some photos from Bellevue's lovely botanical garden, which we visited while in Seattle last month, including the swinging bridge: 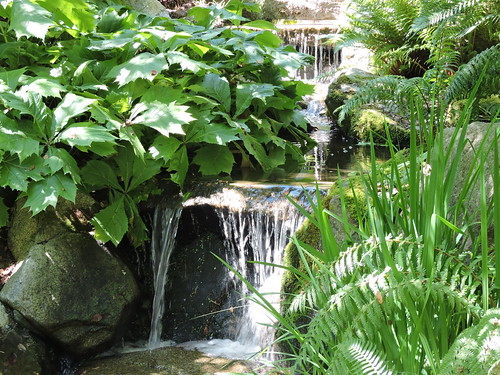