Running late because I got to talk to both of my kids in Seattle this evening -- Adam to catch us up on his birthday weekend, at which he visited a lavender festival but accidentally shipped his lavender tea to us so I get to enjoy some of it, and Daniel because we haven't really talked to him since we were there and he's been juggling a bunch of projects. It was otherwise an uneventful Wednesday whose most notable activity was a failed trip to Home Depot, since apparently our house's outlet covers are so old that no one makes the right size any more.

We've had so much rain here that it feels like Seattle, though they get it in the winter and we've had a July with many, many flood warnings, including today. We half-watched the first episode of Burden of Truth, which was okay, and turned off Planet Earth when foxes were about to eat mountain goats. Speaking of Seattle, here are my kids at the Museum of Popular Culture -- formerly the EMP Museum, and before that, the Science Fiction Museum and Hall of Fame -- with the robot from The Day the Earth Stood Still, in photos taken in 2005 and a couple of weeks ago: 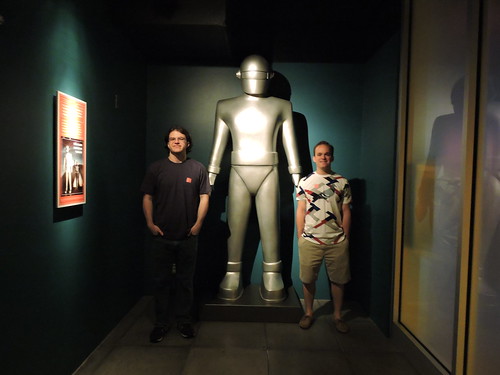