We spent Saturday in Richmond, starting at the VMFA with Cheryl and Lin, where we had lunch in the cafe and visited the Confederate War Memorial Chapel on the grounds, which had not been open while we were there before (it's non-denominational, built in the late 1800s on the grounds of the Soldiers' Home, not a very comfortable place for me as a Jew and as someone very ambivalent about places honoring Confederates). Our main reason for visiting the VMFA was to see their magnificent Napoleon: Power and Splendor exhibit (something else I'm ambivalent about!).

We went to Lewis Ginter Botanical Garden to see the annual Butterflies Live flying around the conservatory and to visit the Origami in the Garden exhibit, consisting of 21 outdoor sculptures based on familiar shapes from the art of paper folding. We had dinner at the River City Diner and had originally planned to stay the night after seeing a production of As You Like It at Agecroft, but we have tons to do at home still, so we left Cheryl and Lin for the show and came back to do chores, plus we watched the quite good movie The Exception. Look for the image in the frame in the second pic! 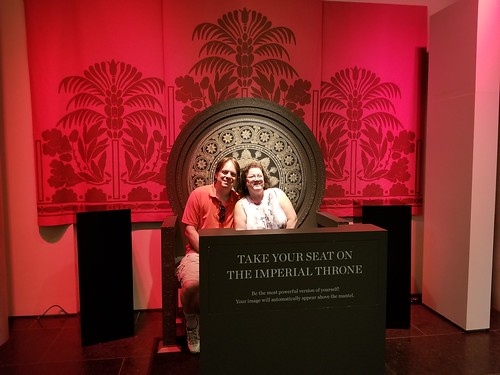