We did boring stuff all morning and I am ready to burn the house down again because we discovered that during the torrential rains last week, water that has always managed to leak in around the chimney apparently overflowed from the attic into the closet in Daniel's bedroom, leaving mold on the ceiling and destroying stuffed animals stored on the top shelf there. Basically, every time we finish fixing and paying off one thing, something else blows up, and Paul does not share my urgent sense that some higher power is telling us repeatedly to get the hell out now before a tree falls on us.

Because I needed distraction and we needed food, we went to two farms on the Montgomery County Farm Tour taking place this weekend -- Star Gazing Farm, which rescues domesticated animals not being cared for elsewhere, and Homestead Farm, which raises goats and chickens though it's primarily a vegetable and fruit orchard. So I got to pet goats, donkeys, alpacas, sheep, and a pig, which makes it a good afternoon. We stopped at Giant on the way home. After dinner we watched Mission Impossible: Rogue Nation because we have free tickets to see Fallout and wanted to make sure we remembered where they left things. 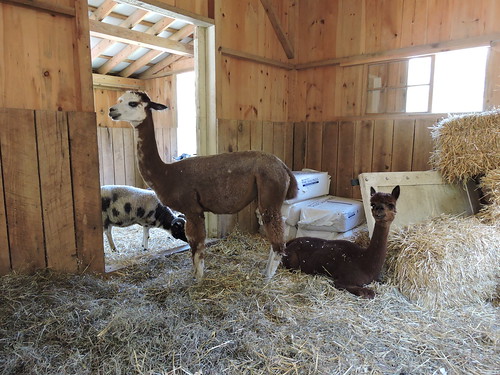