Most of my Tuesday was uneventful, cleaning out Daniel's closet now that we have to worry about mold in there and trying to get estimates on drywall, attic, and roof repairs. I am way behind on things like uploading photos and filing posts, and I did not catch up on any of that because I was folding laundry and trying to stop cats from sitting on the clean clothes before I could get them put away. We went to the mall to Cava for dinner because we had evening tickets to see Mission: Impossible: Fallout courtesy my father's unused Groupon.

It's the first of the series I've seen in the theater, and I'm glad it was this one, because although the plot is more hyperbolic than the previous ones and the characterization is predictable (and, you know, Cruise is Cruise, though Cavill should play more might-be-villains), there's a lovely motorcycle chase through the streets of Paris and a lovely foot chase through the streets of London (geography a bit screwy but we get to see lots of landmarks so I didn't care). There are a bunch of interesting female characters and the non-CGI stunts are great.

We got home in time to watch Elementary, which is supposedly in its last season and I'm worried they're going to do something terrible to Marcus, if they aren't planning to give him a spin-off show as a Fed. Here are photos from Richmond's Lewis Ginter Botanical Garden, which currently has a display of larger-than-life origami sculptures by Santa Fe artist Kevin Box, his wife Jennifer Box, and a group of collaborators (I put the acorn in with the squirrel though they're on opposite sides of a path): 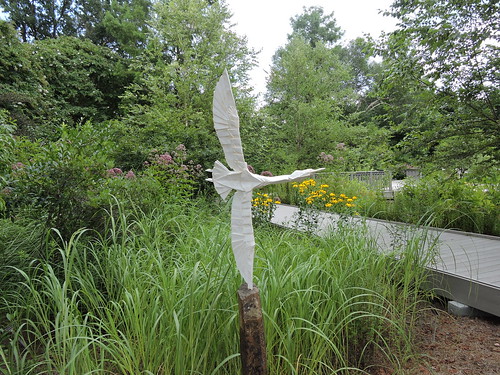