Paul and I went downtown on Sunday with Cheryl and Robert to see Dave, the musical based on the Kevin Kline movie about a presidential lookalike who is asked to impersonate the president when the latter suffers brain death and his staff doesn't trust the VP to keep them around. The musical is hilarious, the cast is great, and the songs are very catchy; as you'd expect, it's somewhat hokey at times but the use of the stage is terrific and I'm never going to complain about a musical that ends by reminding everyone to vote out bombastic liars. There are many jokes about the current unscrupulous idiot in the White House and even a Nationals game in the show.

It's not Hamilton, but it's nice to see a musical where people talk to paintings of Lincoln and argue with 19th century presidents. Afterward we went out to dinner and came back to the house to see whether Cheryl or Robert wanted any of my big old Playbill collection or theater books. After they left to drive home, Paul and I did some cleaning and watched the miserable season finale of Succession, a show about the most unpleasant family ever. Obviously there were no photos inside the theater, but here are a couple of the waterfront-area view from inside the complex, which houses two other stages, and the regional theater's Tony Awards: 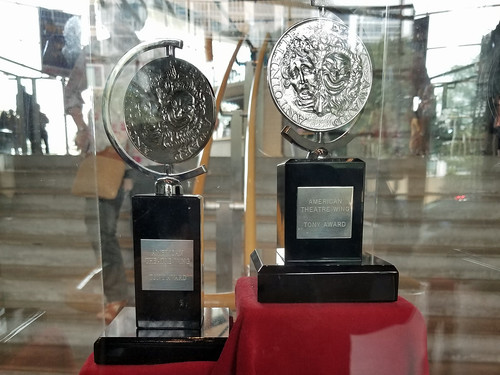