Paul worked from home on Monday because Nationwide was coming to inspect our roof and closet damage. The good news is that a lot of it is covered -- the roof patch, the drywall repair and repaint (which includes the rest of that bedroom -- while the bad news is that we have a significant deductible and we still have to get the roof replaced sooner rather than later. We also have professionals coming to remove the hornet's nest but they can't do it till Tuesday, so hopefully the hornets will sleep late in the morning.

I didn't get out until late in the afternoon, so I didn't get much of a walk in the park, though I did stop in the mall at Crabtree & Evelyn's half-price sale to get body lotion and managed to hold the Sprint Pokemon gym in the face of a Team Valor attack long enough to get my gold badge. We watched about half of the very unpleasant Yankees-White Sox game before Elementary, which had a better set-up than resolution, though I like Joan's family storyline. A few more photos from Star Gazing Farm during the county farm tour the weekend before last: 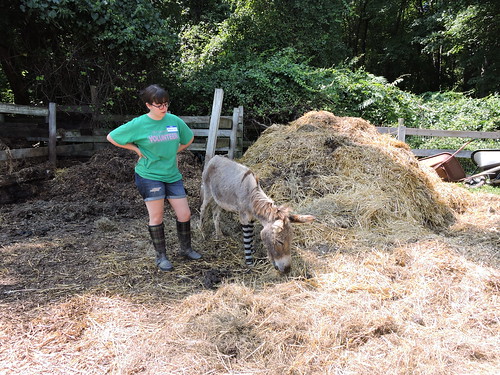