Paul worked from home again on Tuesday because we had a busy day at home dealing with house crises. First, the eco-friendly pest removers came to get rid of the nest of invasive stinging devils, though Paul had told the pest company he thought they were wasps even though I had told him I thought they were hornets, and as soon as the guy saw that I was right, he almost decided to wait and come back with a heavier anti-sting suit. As it happened, he was able to smoke out the hornets and smash the nest with no loss of limb, and hopefully the afternoon rain means they scattered and won't come back because he said we might see angry stragglers for a few hours looking for the nest.

In the afternoon, the company our insurance sent put tarps on the roof where the damage was greatest. (We have to have the whole roof replaced at some point but this way we don't have to commit many thousands of dollars without proper time to get estimates and talk about options). So hopefully when it rains again tomorrow and the next day, since that's been the pattern this whole summer, we won't have more flooding in the house. We only got out for a brief trip to Giant, and tomorrow I have more repair people coming to deal with the mold in the closet. At least The 100 season finale was good and we watched another episode of Burden of Truth, also not bad. Fuchsias from Bellevue Botanical Garden: 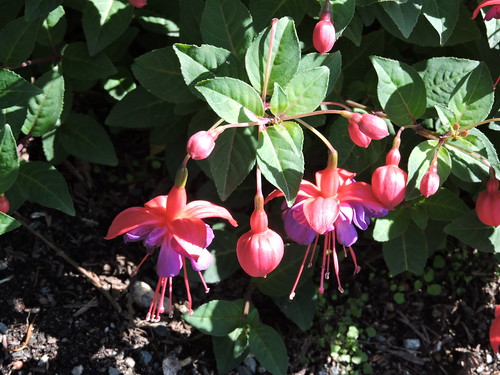