Paul and I got up very early to empty out Daniel's closet before the company coming to remove the mold and dry out the wood arrived. We discovered treasures from Daniel's first pair of shoes to his leftover Bar Mitzvah invitations to Maddy's bridesmaid dress from Noelle and Tommy's wedding, plus a dozen old kids' Halloween costumes and Daniel's missing Thoth Tarot deck. Now we will have big, noisy heaters and dehumidifiers in that room at least through Sunday.

I had won tickets to the Counting Crows concert at Jiffy Lube Live, but when Paul got home, we decided we were too fried to sit in traffic for an hour and a half, then go to the concert, then sit for at least another hour in traffic to get home. Instead we watched The Beatles: Eight Days a Week - The Touring Years, which was pretty great. Around Seattle Center on the Fourth of July, including a citizenship ceremony, a man walking a pig, and the Chartres labyrinth replica: 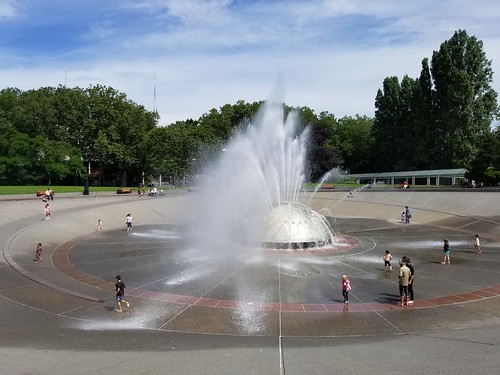