Paul and I are just back from seeing Mary Chapin Carpenter at Wolf Trap, where we saw her several times in the mid-late '90s, but not since, and she is still phenomenal -- she did most of the songs from Come On Come On and Stones in the Road, of which I can sing every word and several of which are major touchstones in my life. The awesome Rhiannon Giddens (whom we knew from Nashville, though we didn't make the connection until afterward) and Francesco Turrisi opened for her and they were wonderful too. We had indoor tickets after having been flooded out of one of those '90s concerts, but we ate on the lawn and the rain held off!

Earlier, we had a quiet morning doing chores -- the fan/dehumidifier is hopefully being picked up tomorrow morning, then more cleanup begins -- and I went to Cabin John Park to catch some Eevees for Pokemon Go Community Day before we did some shopping at Michael's and Giant. I found several shiny Eevees and traded an old, mediocre Jolteon that turned into a high-IV lucky Pokemon. Now we're half-watching pre-season football and horrified reading about the University of Maryland's football program. There were no photos allowed inside the Filene Center once the concert started, but here are a few of the flowers and souvenirs at Wolf Trap National Park for the Performing Arts: 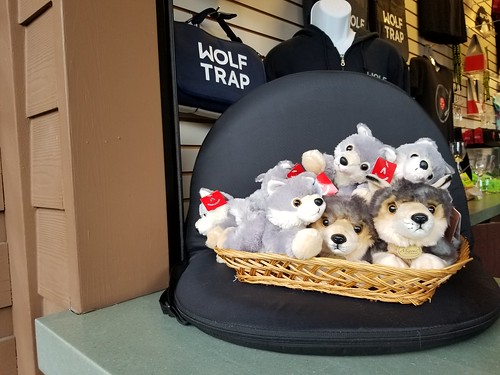