We talked about whether we should go downtown Sunday to counter-protest the Unite the Right march (especially since Metro and the DC police spent the entire weekend sucking up to Klansmen and Nazis in situations where they might have opened fire on Black Lives Matter marchers), but we were drained after three nights of loud hot dehumidifiers that aren't getting picked up till an unholy hour Monday morning, so since it was really the only day we had a block of time, we went to the county fair. It wasn't quite as much fun as when we took our kids to enjoy the midway rides, but we still got to see pig races, a newborn calf, sheep being shorn, goats being judged, crafts being displayed, and funnel cake being eaten (by us)! 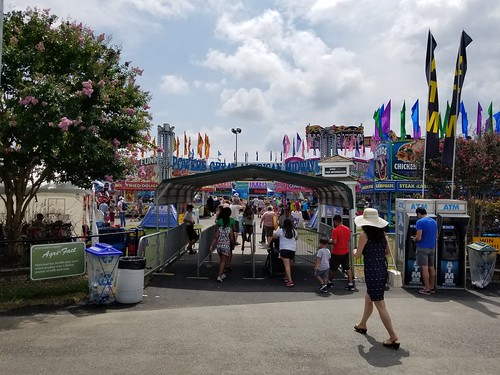 We were not ravenous for dinner after all the health food at the fair (cheese fries, fried Oreos) so we had a quick dinner and watched two episodes of Versailles, in which Louis and Philippe do a fine job channeling Thor and Loki except the other way around, though there's not nearly enough Philippe/Lorraine and the Princess Palatine needs better storylines. Then we watched this week's Elementary, a show where the character work is always great but everyone looks bored with every murder-of-the-week storyline. I am still rooting for a Marcus spinoff and terrified that instead we're headed toward a Marcus death-and-investigation to motivate everyone as the series enters its final episodes.
Collapse