I did not even attempt to adult on Friday. My cat-sitter Rose had not seen Ant-Man and the Wasp, and since she will cat-sit for us while we're at the beach, I took her; it was a delight to see again! Then I ate lunch very late at Cava, since I was in the mall, and also since I was in the mall, I wasted half an hour in Sephora trying on the new Viktor & Rolf Magic Collection before joining my friends at a Regirock raid. He ran on one account and I had to solicit help to catch him on the other.

We were hoping Cheryl would arrive at PotterVerse early enough for us to have dinner with her, but for a variety of reasons she didn't get there until late in the evening, so we had sandwiches at home and watched a friend's screener of The Catcher Was a Spy, which is quite enjoyable and has a phenomenal cast though I won't vouch for its historical accuracy (and you may know the story from the Einstein season of Genius). Pigs at the county fair last weekend: 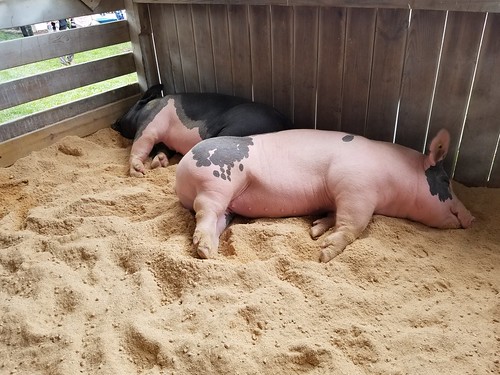