Quickie because I am in Fenwick Island with Paul and Adam, after driving up here in pouring rain which thankfully stopped as we turned up the coastal highway, allowing us to go to the beach right after we arrived! The Atlantic was rough but was nice -- warm enough to swim, though I was trying to keep my hair dry so I didn't have to screw with it before dinner so I only waded -- and we had the beach nearly to ourselves apart from seagulls, sandpipers, and a couple of dolphins that swam right by Adam! I only found very small mole crabs this evening, but I'm attributing that to the fact that the tide was all the way in.

It was drizzling again by the time we were ready to eat, so we went across the street to Warren's Station where Adam and I could get veggie meat and Paul could get seafood. There was a big lightning storm while we ate, so we postponed looking for ghost crabs and went to the Seaside Country Store to get fudge and Old Bay peanuts (of course I also made everyone wait while I admired all the pirate, mermaid, seashell, cat, holiday, nautical, sports, and beach-themed collectibles). Now we're watching the Nationals, eating the fudge, discussing Pokemon with Adam's girlfriend, and drinking Adam's fancy lavender tea! 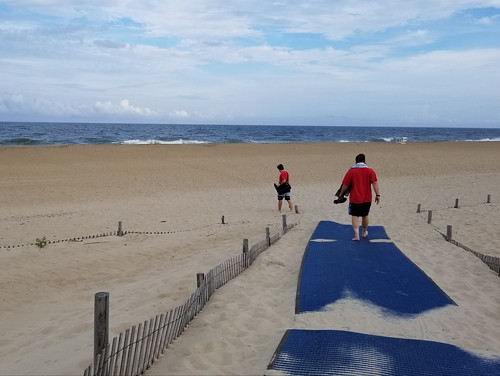