We had a great beach day on Wednesday with just a bit of rain in the afternoon when we were kind of tired and wanted an hour of down time anyway! We went to the beach in Fenwick Island in the morning, where we saw a big pod of dolphins just off shore -- eight or nine of them porpoising and smacking their tail flukes! There were also lots of seagulls and sandpipers, which let me know where to look for mole crabs. The water was chillier than Tuesday but still nice and not particularly rough.

After a couple of hours, we went in to wash off, then went to Rehoboth Beach for lunch at Nicola's Pizza because it is not a Delaware beach trip without Nic-o-bolis. We did a little bit of shopping in Rehoboth and went to Funland, where Adam and I both won little stuffed clownfish playing skee ball. Plus we went to Dolle's to get salt water taffy. The other members of my family also had Kohr Bros. ice cream but I was still too full from lunch; I'll go to the one across from Viking Golf tomorrow!

We didn't want a big dinner after the Nic-o-bolis, so after a stop at Sunsations because Adam had forgotten to pack his beach towel, we came back to the hotel and made sandwiches. When it was dark enough, we walked out onto the very dark beach (clouds were covering the moon) to find ghost crabs. Then we came back to watch the glorious end of the Nationals game and I caught two Lunatones, something I have never managed in Maryland and had to hunt for in Seattle, though I'm behind on the Celebi quest! 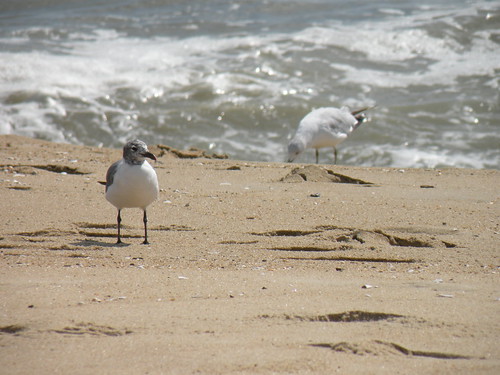