We are (sadly) home from the Eastern Shore, doing laundry and trying to organize things while Adam prepares to move to College Park on Saturday for his senior year. We got up early so we could go to the beach before we had to check out; the water was as calm as it has been since we arrived, and we saw at least 20 dolphins leaping just past the surf, closer to us than people swimming parallel to the shore! After we cleaned off, packed up, and drove to Rehoboth Beach, we ordered Nic-o-bolis for dinner, then got Thrasher's french fries plus ice cream and whoopie pies for breakfast while waiting for them to be packed.

We stopped to picnic for lunch at Martinak State Park on the Choptank River and Watts Creek, where we walked to the pier after we ate and saw fish and a skink. Then we drove the rest of the way home, threw in a laundry, and went to my mom's house to eat the Nic-o-bolis. It was a sad evening because we learned earlier in the day that Paul's aunt Nadine, his father's youngest sister, had died earlier in the day of an inherited liver disease, so we called his parents, who are upset that they weren't well enough to travel to see her this month. Now we're trying to find all the things Adam stored in the basement before the bedbug invasion. 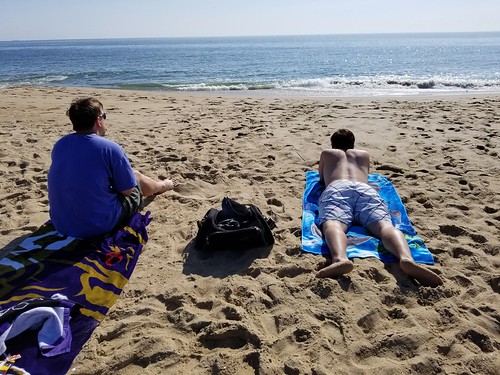