Still having internet issues and it's late here! Very quickly: Woke in Trouville-sur-mer, drove to Bayeux to see the famous tapestry depicting the Norman Invasion which is absolutely amazing, then drove to Aromanches for lunch on the seawall and to see the D-Day installations that remain on the beach. From there we went to Omaha Beach in what's now the quiet seaside town of Saint-Laurent, with only a large monument to commemorate the battle, and nearby Longues-sur-Mer, where the remains of a German battery still stand. After that we drove to Mont Saint-Michel, which is even more amazing than the Bayeux Tapestry, and had dinner within the city (we could have gone to a charming medieval-style cafe but chose instead a big modern glass-sided restaurant with spectacular views of the water). Exhausted now, more tomorrow! 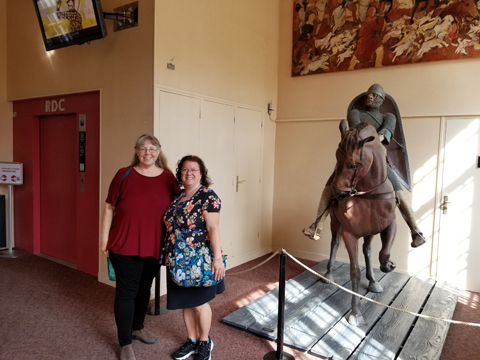