Major internet issues so sadly just a few photos from a glorious day that began with an early visit to Mont Saint-Michel just as the abbey opened, meaning we got to walk on the ramparts and climb the many, many steps to the upper levels of the city. Though there were many tourists, none of the rooms was crowded and it was nice and cool overlooking the water! We picked up sandwiches before leaving, and when we saw the lines for the buses back to the mainland, we decided to go in a horse-drawn carriage instead, which is a really lovely way to see the sheep and seaside on the way to the town.

Then we drove to Carnac, stopping to picnic on the way. We walked among some of the many megaliths and tried to decide which museums to visit, then realized that if we took the little train that goes around the city with stops at the beach and the pretty seaside town as well as the salt marshes and port, all while getting a narration about the history of the area. We got a pretty comprehensive look at the menhirs and dolmens and it was very nice not to walk several more kilometers after several days on our feet!

In the late afternoon, we drove to the Auberge du Petit Matelot on the Atlantic near Quiberon, walked along the shore, and had dinner outside while watching the sunset at Creperie avel mor. More photos when I can upload them! 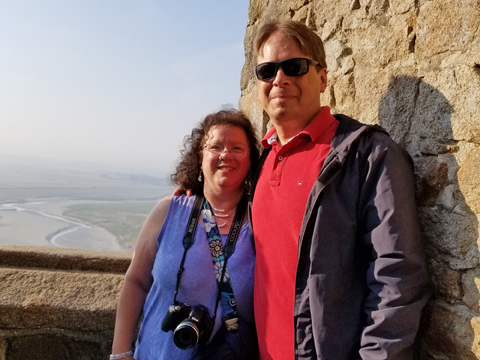 We started our Wednesday after a great breakfast at the Château de Trécesson, a 13th century castle surrounded by water. Most of the rest of the day was spent visiting Arthurian sites, all on my list after having been to Glastonbury and Snowdonia. We walked to the megaliths of the Hotié de Viviane, visited the Church of the Grail with its beautiful stained glass, had lunch near the Val sans Retour after walking to the golden tree, and stopped at the ancient Guillotin Oak which is nearly a thousand years old.

Then we went to the Arthurian Center at the Château de Comper, a castle which is gorgeous in itself, situated on a lake where the trees are starting to turn for autumn, and which has displays on King Arthur myths focused on the French versions but with nods to everything from T.H. White to The Mists of Avalon to Merlin to Monty Python. After that we went to the Tomb of Merlin and the nearby Fountain of Youth (which does not appear to have de-aged us any), plus the park at the Lac de Trémelin which has a sword in a stone we were unable to dislodge.

Finally we drove two hours to Angers, where Anjou reaches the Loire Valley, and had an excellent Lebanese dinner at Le Comptoir Phenicien. The photos below are from the Château de Trécesson, Hotié de Viviane, Jardin aux Moines, Chêne à Guillotin, Arthurian Center, Tomb of Merlin, Fountain of Youth, and Lac de Trémelin: 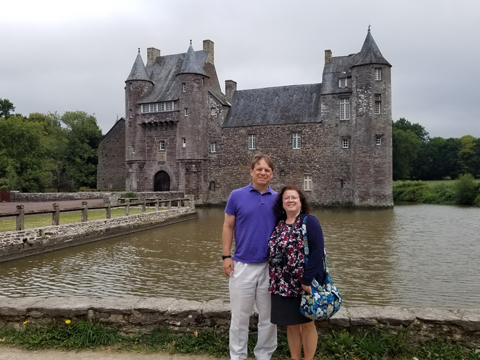