As you could guess, I spent most of my rainy Rosh Hashanah unpacking, doing laundry, cleaning, sorting and uploading photos, shopping for food, trying to make a dent in back email and social media comments, and attempting to give my cats as much attention as they wanted. Apparently we had another flood in the closet in older son's room while we were gone; the good news is that it hadn't been repaired yet, so there was no new shelf there to get damaged, but the bad news is that the carpet got wet and we're now trying to get it dried out. (Our insurance is arguing quotes to repair the roof, which is taking longer than it should, but if we don't have to pay to fix the roof entirely ourselves, it will be worth it.) We caught up on last week's Elementary before watching this week's, but that was the extent of the excitement. And now I must crash because my brain isn't sure what time zone I'm in! At Monet's garden in Giverny: 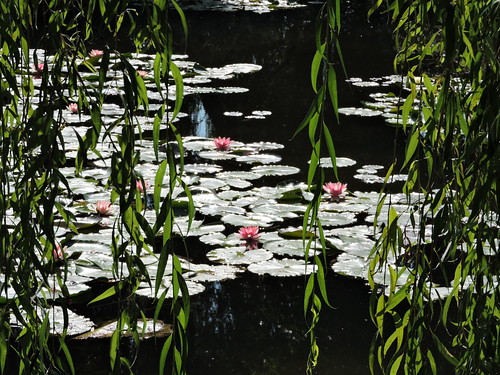