I did a bunch of work on Friday morning, then I goofed off for a couple of hours doing Articuno and Moltres raids. I still don't have a shiny one of either, but I got to raid with people I haven't seen since before I went to Delaware, so that was fun! Paul's office hackathon ended but he didn't win a big prize, though he didn't seem devastated. We had a late quick dinner and watched A Little Chaos with Cheryl, since she had not seen it and a movie about a Versailles gardener with scenes at Fontainebleau (though they were filmed in England) was just what we were in the mood for. And that's not even counting Alan Rickman and Kate Winslet. The Nationals and Orioles were playing terribly, anyway.

Speaking of Fontainebleau, here are photos of some of Napoléon's rooms and belongings from there. Because the palace is so old, many of the rooms contain elements from multiple eras or replica furniture alongside originals, though these are mostly restored to specific years. These are the emperor's throne room, bedroom, library (I don't envy much in castles but I do envy that), bathroom (in which he also took meetings, because why waste time), office (with "camp bed" in case he needed a rest during his long work days), salon (also the room in which he abdicated), nursery furniture for Napoleon's son a.k.a. the King of Rome, and the steps to the courtyard that Napoleon descended to make his abdication speech. 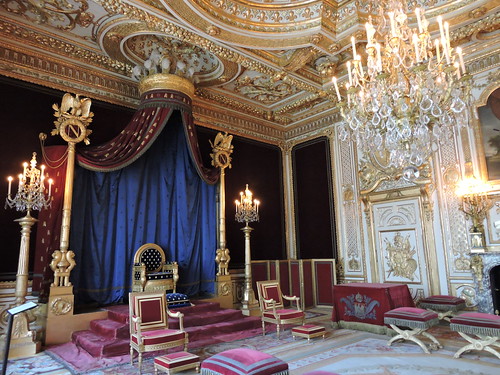