We may have missed the Maryland Renaissance Festival because of rain on Sunday, but we ended up not missing the Mediaeval Baebes' visit to the area because Paul got us tickets to see them at the Institute of Musical Traditions concert at Saint Mark's Church ten minutes from our house! They did two sets in a place with much better acoustics than the outdoor faire stage, the place was packed -- I think Victoria made them more famous in America than they had been -- and we ran into Angela, Lena, Jack, and several of their friends there so that was lots of fun! My day was otherwise not exciting -- it rained from dawn till dusk again with periods where it was merely drizzle and periods where it was coming down hard, I did a bunch of chores, tried to walk in the park but it was too muddy for me to keep it up for long. So have some photos from the concert! 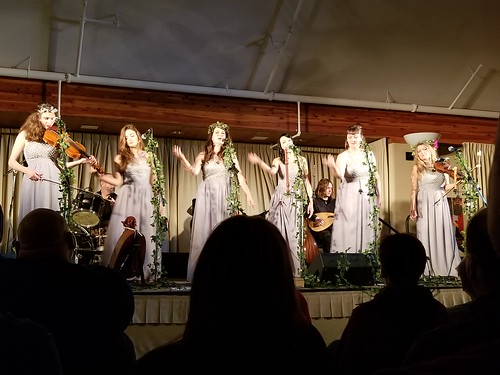