So apparently I am either having allergies, or my sinuses are upset from all the dust from cleaning yesterday, or the migraine that came in with this evening's storm has settled in my sinuses, or despite having seen few of my friends in days I have managed to catch a cold, but in any case my head is stuffed right now and I feel incoherent. It was not an exciting day, anyway, despite being older son's 25th birthday -- we Skyped him briefly, but he was on his way out to go play mini golf with friends.

We were supposed to have dinner with Karen and Jim, but postponed till tomorrow because of the weather, so we ate leftovers. I had to turn off the news so I wouldn't throw up and ended up watching a bit of Iron Man 3 on USA, which put me in the mood to watch the whole thing, and we did. Here are some photos from Honfleur, including the plaque commemorating Champlain's 1608 departure to found Quebec, the 14th century church that is now a marine museum, and the view Monet painted that has changed little: 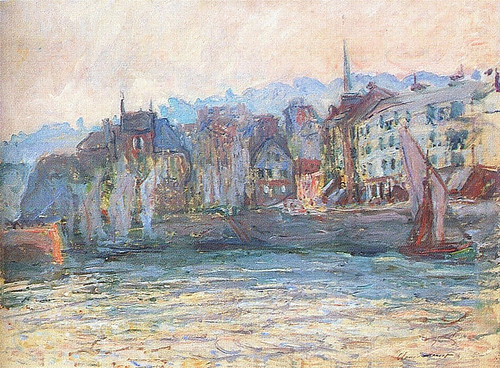