I watched TV most of the day. I was pretty okay while Ford was testifying, even though it was obvious the Republicans wanted a prosecutor not to get at the truth or even protect them from sounding like assholes (since they were perfectly comfortable all day sounding like assholes) but to try to make the story about the Democrats playing politics while they pretended to feel sorry for the assault victim. As soon as Kavanaugh came out shouting and ranting, though, with Lindsey Graham declaring that this is the most despicable thing he has seen in politics -- we need to put him in a for-pay prison or send him to live in Flint -- I had to get out before my blood pressure became dangerous.

It wasn't all bad when I decided to live in denial for a couple of hours. I did back-to-back Mewtwo raids at the mall and got an invite to what we all hope will be a Deoxys raid at Starbucks next week, then when Paul got home we went out for Mexican food with Karen and Jim. I needed something funny and feminist when we got home, so we watched Girls Trip, which is fit the bill pretty perfectly; I was worried that the infidelity-and-forgiveness story was going to take over one character's arc, but that was resolved greatly to my satisfaction, and the acting was spot-on and hilarious even when over the top. Here because it relaxes me is the Abbey of Mont-Saint-Michel: 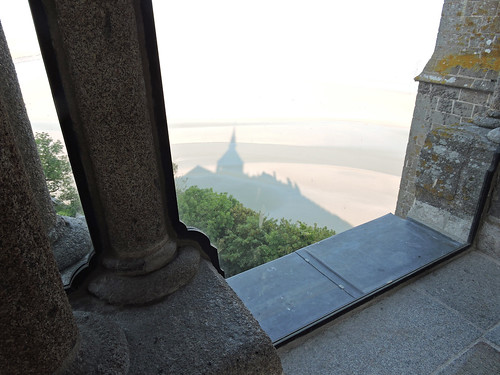