Flickr and I have been fighting for the past two hours, so I must keep this short -- none of the photos below may have tags or albums saved, sorry. Not an exciting morning, which involved unpacking and travel laundry; in the afternoon I had a pass for the first Deoxys EX raid, so first I went to the mall for a Mewtwo raid, then I stopped in the park with people from that raid for another, and I had bubble tea and a bagel while waiting for Deoxys (which I now have on both accounts, though in both cases someone else helped me catch him).

Hmm, I guess it was a Pokemon-centric afternoon, which is easier than thinking about politics. Paul and I went to the food store via a Pokestop that I'd been told had the new Spinda quest, so now I have the third Spinda, too. There was football on this evening while I was fighting with Flickr, and I think Kansas City may have beaten Denver, but I did not pay much attention. Here if they show up are some photos of the Chihuly installations in the gardens around the Biltmore estate and in one case in the entrance hall of the mansion: 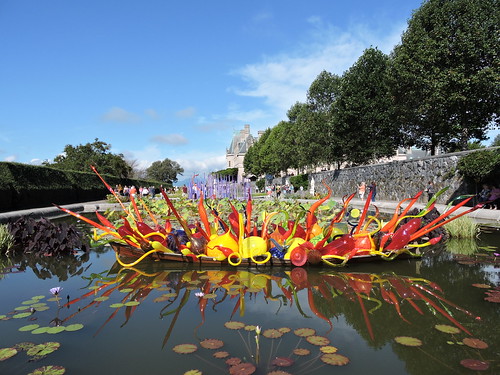