Had lunch and went shopping with Alice, whom I hadn't seen in far too long, and now we're bingeing the last four episodes of the season of The Man in the High Castle, which at several critical scenes has had me screaming at the TV, mostly things like "YOU NAZI BASTARDS!" and "JUST DIE ALREADY YOU FUCKER!"

This is not really a spoiler but a speculation: when you have a show in which Josef Mengele is a character, and you have another character who ostensibly died a season ago in the name of eugenics but whose body has not appeared onscreen, even if that character's death was the driving force behind the motivations of many other characters this season, aren't the odds good that that character didn't die in the first place and is instead being experimented upon horribly?

Ugh, it's a year before the new season. I may need fan fiction; please tell me that "John Smith Is A Nazi Asshole" is an AO3 tag. Meanwhile, to make me stop screaming, here are a couple of photos of Rouen's Holocaust memorial (every French town has a WWI memorial, but very few commemorate WWII): 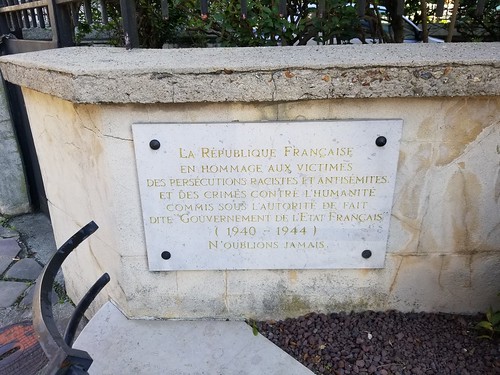