I spent Friday morning working on my France photo book, which is taking forever because Shutterfly's site is sucking so much that I'm thinking after decades I need to find a new service. Then I went to a Pokemon raid in Cabin John Park, where a friend helped me catch a 98 IV Mewtwo, and I walked for an hour because the weather was magnificent. We were supposed to have dinner with my parents, but my father wasn't feeling well and thought he might be contagious, though I saw my mother because she brought us cookies.

We watched the season premiere of Blindspot, which I liked because of Jaimie Alexander kicking ass though the show needs to stop finding contrived ways to keep Jane and Kurt apart. Then we watched The Guernsey Literary & Potato Peel Pie Society, which has lots of Downton Abbey actors and is quite enjoyable though a lot of the darker aspects of the story are kind of glossed over to keep the focus on the relationships. Because I am missing the beach, here are photos of the white cliffs of Étretat in Normandy: 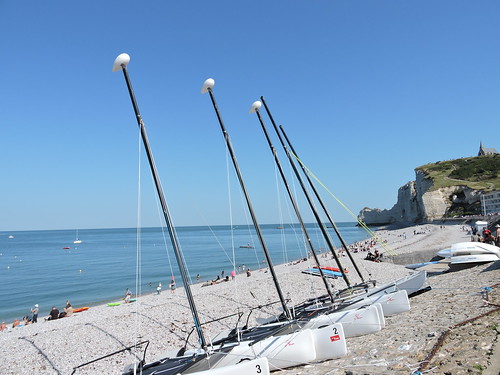