We spent Sunday with Cheryl in Manheim at the Pennsylvania Renaissance Faire, where the morning drizzle eventually stopped though it remained nicely autumnal and cool! It was as crowded as we've ever seen the parking lots, though we had almost no traffic getting there and once inside it didn't feel packed and crazy the way the Maryland Renaissance Festival has the past few times we've gone -- we only waited in line for food for about five minutes, had no trouble finding tables, and there were plenty of seats five minutes before the joust and ten minutes before Albannach performed.

We even got seats at the newly renovated Chess Board Stage where the falconers show their birds, plus we saw the Kings of England and France and met Sir William (I have a photo, will post when I get it to download from my phone). Plus we bought some trinkets and looked at a lot of crafts, though we were getting chilly by day's end and happy to meet Paul's parents for dinner in Hanover, where we ate at the Hibachi Buffet before coming home in time for Madam Secretary. My only disappointment is that the pirate ship armory is now a bar! Here are just a couple of photos, more when I get organized: 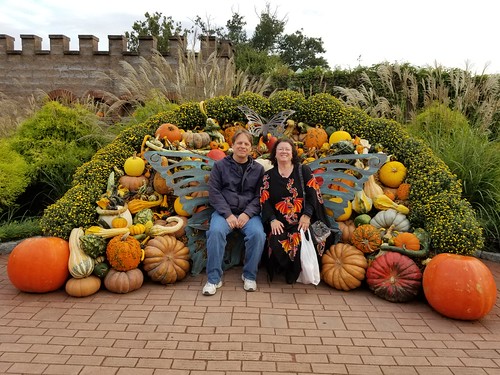