Paul left to go to work, discovered that he had a flat tire, and promptly came back, so I followed him to the tire place and then drove him back so he could work from home. We had a fairly quiet day surrounded by cats who kept forgetting that we had both already fed them. Then we went to retrieve the car, followed by hummus and lebneh at Lebanese Taverna with Karen, which was lovely.

When we got home, we caught up on last night's Supergirl (finally a show mostly about women!) and the season premiere of Legends of Tomorrow (not precisely historically accurate Woodstock but still enjoyable), then I mostly ignored the Giants game while finishing up a 2019 Shutterfly calendar (the web site was working!). Some more fall color from Brookside Gardens in and out of the conservatory: 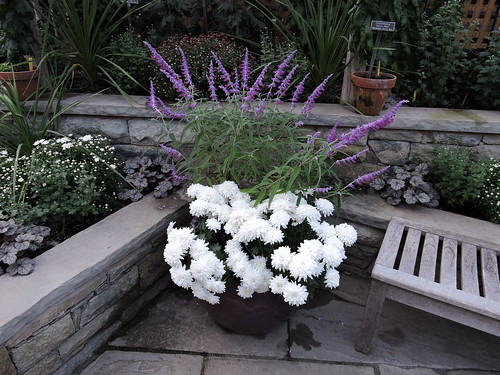