It was over 70 degrees on the first day of November, and I was having a lovely afternoon, having stopped by a local jewelry store that's closed permanently as of this evening after being around nearly all my life, and having bought the last sesame seed bagel at Goldberg's, when I went to the park to take a walk and took a swing in front of the stadium to do a Pokemon raid...where I grazed the curb where it sticks out around the sewer and got a flat tire. Arrgh! AAA came and put the spare on so I could drive the van to get it replaced.

Because of that interruption, I did not get a bunch of things done that I intended to do, though any day one scores Alex & Ani copper from the Statue of Liberty for under $10 must be accounted a good day anyway. We had a rushed dinner because Paul had to come rescue me since we only have one vehicle at the moment, then we watched the hilarious 49ers-Raiders game (well, hilarious in its score; I haven't seen anything as awful as Raheem Mostert breaking his arm on the field since the last rerun of Theismann's leg breaking). A few more Halloween pics: 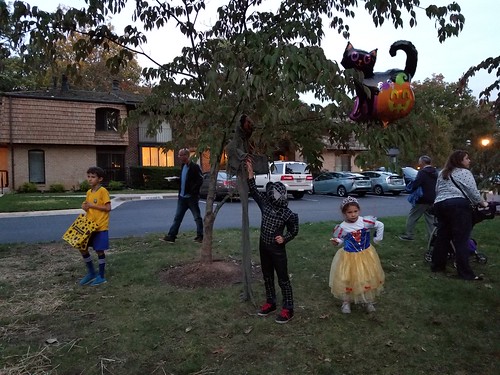