Paul worked from home on Friday so I could use the car, though I ended up not needing it because I spent a lot of the day fighting with photos on my computer and only went out to walk to a Shinx raid in the neighborhood. We had nice warm weather in the morning that slowly got cooler and wetter as the day went on, until by the time we left to meet my parents for dinner at California Pizza Kitchen, it was raining quite hard, and now it's dropped nearly 20 degrees and there's a tornado warning one county over.

We got home in time to watch this week's Blindspot, which has been quite enjoyable this year character-wise though I think the government is even more full of corrupt agencies on that show than in real life and not always believably (testing bio-weapons on FBI agents at an FBI facility, really?). Then we caught up on this week's Legends of Tomorrow, with my favorite Disneyfied fairy godmother of all time, plus piggies. From the C&O Canal by Riley's Lock last weekend, some wildlife and turning leaves: 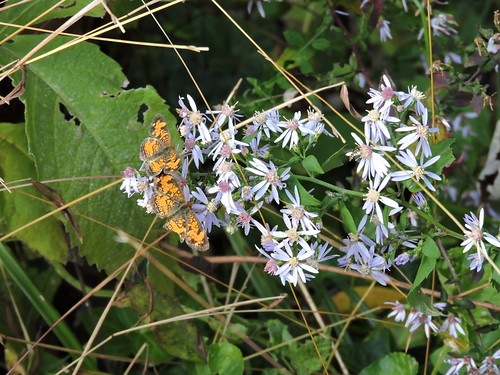