After having brunch here, I spent most of a lovely cool Saturday with Paul and Cheryl in the Shenandoah Valley, where we went to the Museum of the Shenandoah Valley to see the Maxfield Parrish and Albrecht Durer exhibits, both of which were excellent, though I confess I enjoyed the former a great deal more with the exception of the William Blake prints in the latter. We also visited the Terry Ward exhibit and the miniature houses.

There was a lot of construction going on around the gardens, so we thought we might go to Skyline Drive to see the tree color there, but there were reports of traffic backed up for many miles at the entrance to Shenandoah National Park, so instead we decided to do something equally tasteful and scenic, and went to Dinosaur Land in White Post (on Stonewall Jackson Highway, which might explain all the Confederate souvenirs in the gift shop).

We came back as the sun was going down, ordered pizza, and watched Bombshell: The Hedy Lamarr Story, which is excellent; I thought I knew a lot about her life as an inventor, but I learned a lot more, and it's very well filmed. After Cheryl went home, we watched the end of several football games (none of which ended the way I wanted) before Saturday Night Live. Here are photos including dinosaurs, prints, and me and Paul enacting Distracted Boyfriend: 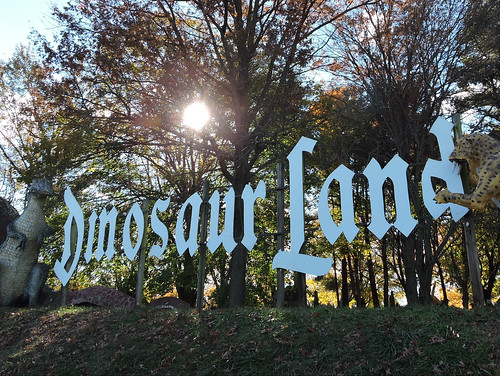