It may be a slow poetry week, sorry. I had a nice low-key Monday hanging out with Daniel, who had to work all day but was able to watch Ant-Man and the Wasp (which he hadn't yet seen) while he was waiting for things to compile in the morning. In the afternoon he had a couple of phone conferences, so I went to the park, took a walk, and did a couple of Pokemon raids (of which Daniel approved, since he is playing Let's Go, Pikachu).

When Paul got home, he made veggie salisbury steak since he knows Daniel likes it, and after we ate, we watched Legends of Tomorrow (episodes have been winner after winner so far this year, though I want to know where that Herndon Renfaire takes place). Then we put on the insane Rams-Chiefs game, which had the highest score ever on Monday Night Football and nearly went into overtime before the Rams intercepted in the last minute.

I should write something coherent on Fantastic Beasts: The Crimes of Grindelwald, but it's shaping up to be one of those weeks when I don't write half of that I meant to -- it must have been a man without a family who decided that November should be the month for NaNoWriMo -- so I will just write down a few things before I forget and maybe talk about it more when the DVD is out. ( Collapse ) Some cows from Kiparoo Farm and South Mountain Creamery from our excursion last weekend: 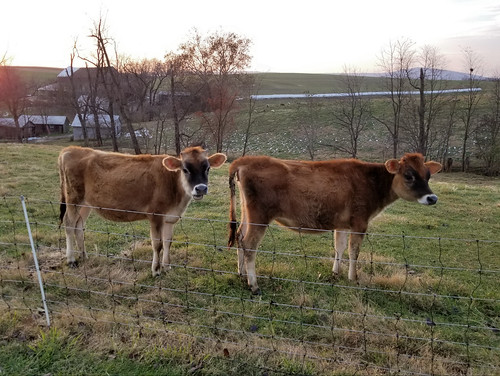