While Daniel was at lunch with my father at the pancake house, I met my friend Noelle, whom I have known since elementary school and whose parents still live up the street from mine. We had eggs and bagels at Goldberg's, then we went to Dunkin' Donuts because we needed chocolate, catching up since last Thanksgiving on family stuff, the political landscape, and oh dear how did we get to be 50ish. It was awesome.

In the late afternoon, Daniel and I started watching Westworld's second season since he hasn't seen it, which we resumed with Paul in the evening after The Flash (meh) and Black Lightning (suddenly reminding me of The Gifted, which we'll have to catch up on since we missed it tonight). Katniss supervised Daniel while he was working before and after lunch, so here are some photos of that and of me and Noelle: 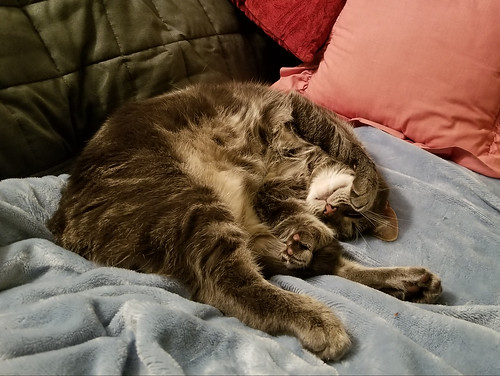