Watching SNL and Leslie Jones is making me laugh so I will keep this short. We had Seattle weather on Saturday -- chilly, drizzle, very dark -- so we mostly did indoor things, though we avoided all major shopping areas because we heard about the Bath & Body Works candle sale lines. Instead we went to the fabulous Montgomery Potters winter show, where there are lots of gorgeous handmade items that in most cases are very reasonably priced: 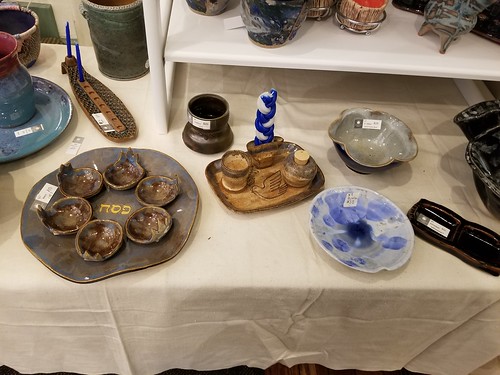 We did stop at Giant (and Starbucks, because I was waiting for a raid for Pokemon community day, though my stupid Starbucks card would not work). After dinner we watched Outlaw King, which was reasonably engrossing, had lovely settings and Chris Pine was fine, but also had a huge amount of very vivid violence, then we watched the rest of the Big 10 championship which was quite enjoyable until it became obvious that Ohio State was going to win!
Collapse