I had a nice, somewhat unexpected Friday. Paul's office was doing a Toys for Tots drive and group breakfast, after which he expected to come home, but when he went to leave, the tire pressure light was on and the gauge couldn't get a reading on which tire was acting up. Meanwhile, I had lunch plans with Alice, who came over and we were deciding where to go when Paul called to ask whether I could pick him up from the dealer. So we all went to the Silver Diner and did a bit of shopping since Alice was looking for things for her family and I took advantage of being in AC Moore while picture frames were all on sale.

After Alice went to retrieve her son, Paul and I did a bunch of cleanup we hadn't gotten to since the kids were home -- everything from sweeping the leaves off the deck to vacuuming the parts of the first floor we often skip. We talked briefly to Adam, who has accepted a job at Hive in San Francisco after graduating in May! Then we went to my parents' for dinner and Chanukah, went to pick up the car which had its tire pressure light fixed, and watched Blindspot and some more Marvelous Mrs. Maisel. This year Longwood Gardens had lots of awesome carved book decorations in the library and one in the gift shop: 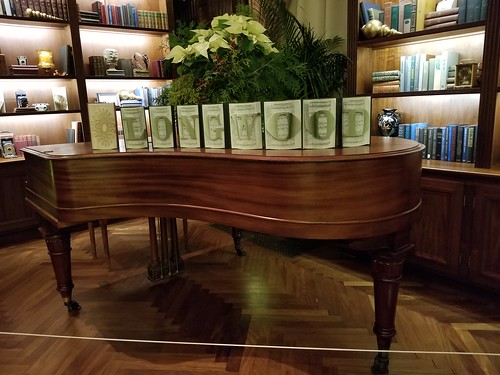