Sunday was cold and gray, though I'm not complaining because if I lived an hour south, we'd have had a foot of snow and all the attendant problems living in an area that doesn't know how to cope with winter weather. We thought about going to Mount Vernon to see the Christmas displays, but we ran a bit late and I wanted to stop at the mall for a Pokemon thing, so since we were going to be at Arclight anyway, we went to see The Favourite. The acting is exceptional and the first hour is bitingly funny, though it's a much darker movie than the ads suggest.

We missed the Ravens blowing it while we were at the movies, and DC football proved that they should have signed Colin Kaepernick (it's not too late, but I don't see Dan Snyder of all owners doing that even to save the season). We skipped Doctor Who for the first night of "Elseworlds" on The Flash (reasonably entertaining mostly for the guest cast), plus Madam Secretary (I don't know how Elizabeth doesn't literally smash heads together). And we lit the candles for the last night of Chanukah and exchanged books and DVDs: 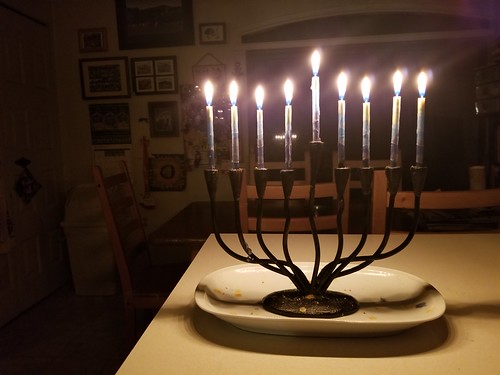