On Monday morning we took Daniel to National Airport to fly to Seattle. His flight was late enough that we had time for lunch at Ben's Chili Bowl before he went through security -- there were news teams in the airport, presumably reporting on possible TSA disruptions from the government shutdown -- and we came home to get various work and chores done. Adam will be back at the airport in two days to fly to Curaçao with Katherine to celebrate their both having jobs after graduation. 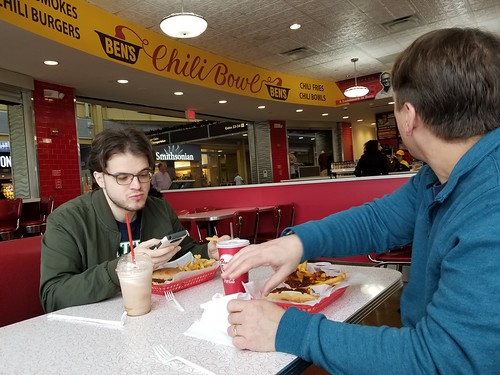 We had Indian food for dinner and watched the Clemson-Alabama championship game, which I thought might have a big score discrepancy but expected Alabama to win, so we enjoyed that a lot! Annoyingly, our county apparently decided to stop picking up certain types of plastic recycling as of the start of this year, but didn't send out any kind of notification the way they do when they change the pickup schedules for holidays, so they picked up almost nobody's bins this morning and the street is a mess!
Collapse