I woke up on Friday with my back really killing me, which makes me very unhappy because I so do not want a replay of my month of agony from last year when I couldn't sit for any period of time including in a car to drive places. Advil and heat helps but only so much. I had plans to go see Aquaman with my cat-sitter neighbor, but she was sick, so I did what chores I could with my back killing me and went to CVS to get more Advil and Ben-Gay. My unhelpful cat threw up all over the carpet, requiring a lot of kneeling and scrubbing.

We had dinner with my parents, then came home for this week's Blindspot, which I liked a lot -- I've missed Jane being Jane -- then the Madam Secretary episode that we missed on Sunday, which I liked as well, both politically (would that we had that kind of a White House) and in terms of the characters (man, I hope Téa and Tim don't break up while the show is running). Plus we watched the first episode of Tidelands, which was pretty and strange. From National Harbor, here is the very colorful Peeps and Company store: 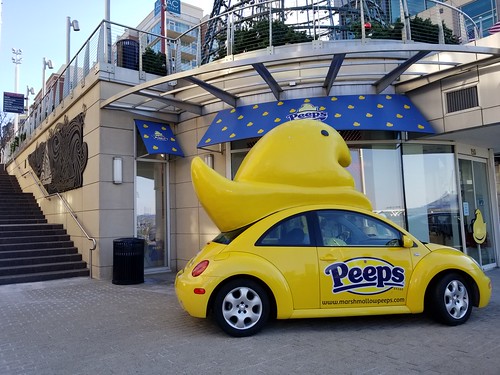