I have had a lovely busy day during which very little work got done! I met a friend from Pokemon Go who works at Marriott headquarters in Bethesda, which I knew from PoGo had a Model T in the building because the gym there is named for the car, and he had offered to give several of us a tour of the museum and display rooms. I had in my head that "display rooms" meant dioramas, but it's actual full-size replicas of hotel and conference rooms from Marriott-owned hotels all over the world, so that was very cool! Afterward a bunch of local PoGo players went to the mall for lunch at Crave.

The Sears in our mall is closing in a week, so I stopped in to see whether anything was on an insane sale, but pretty much the entire store has been wiped out and there are only a few linens and rugs plus some very ugly shirts at 90% off. Then I came home to try to get some things done before going out to meet Angela and Carrie at Lebanese Taverna for dinner, a date we've had on the calendar since December because our holiday schedules were so busy. I brought Paul shawarma and we watched The Flash (meh except Tom Cavanagh) and The Gifted (go Lauren). 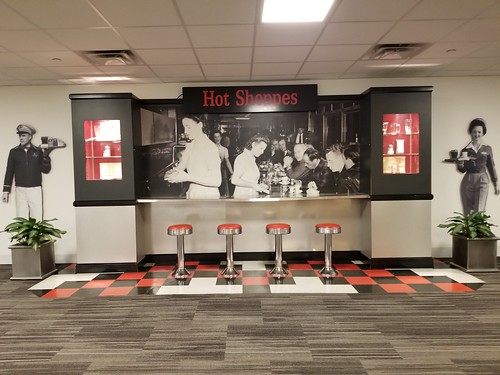