The DC area was under another Doom Watch all day Thursday with the initial snowfall totals growing and the predicted hour of its start getting earlier all afternoon. So I kept an eye on the sky while taking Adam and Maddy to lunch at Noodles and Company (he wanted spicy food, she wanted the opposite) and to grab essentials at MOM's. The snow was just starting when I went to the church around the corner to do a Kyogre raid, and now we have new snow over the old.

We watched The Orville, which was predictable but fun (Yul Brynner! Billy Joel!), then, since it's now streaming, we watched A Star Is Born, which I felt the same about as the first time: adore the music, love the performances, appreciate the first hour, feel increasingly manipulated by the flaws in the screenplay in the second hour so that by the climax I'm more irritated than moved. Since it is snowing again, here is some color from Hillwood's greenhouse: 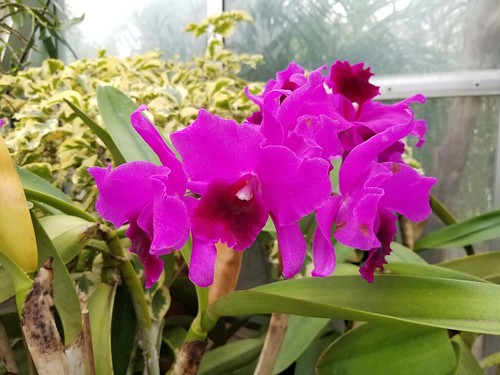