We had less than an inch of new snow on the ground on Friday morning, but Paul worked from home to avoid potential traffic entanglements, so we hung out with Adam listening to music, eating soup and cheese for lunch, and eventually watching Boy Erased now that it's streaming because I'd meant to see it in the theater weeks ago -- Crowe, Kidman, and Hedges are wonderful and for the most part the directing is nicely restrained, but there's a horrible rape scene about which no one warned me and I felt like in the effort to keep the parents humanized, the kid's trauma doesn't get explored deeply enough.

While Paul was on a call with the office, I went out to a Kyogre raid in the park. We had dinner with my parents, who wanted to hear about Adam's trip and gave me a late birthday present, a birthstone ring which I've wanted for a long time. We came home for Blindspot -- not sure I believe Zapata though I wish I could -- and were going to put on a movie, but we thought Adam had just gone upstairs for a few minutes to Skype his girlfriend and an hour later realized he was probably asleep, so we watched the Australian Open instead. Here are some of the Faberge eggs and luxury itemws that we saw at Hillwood last weekend: 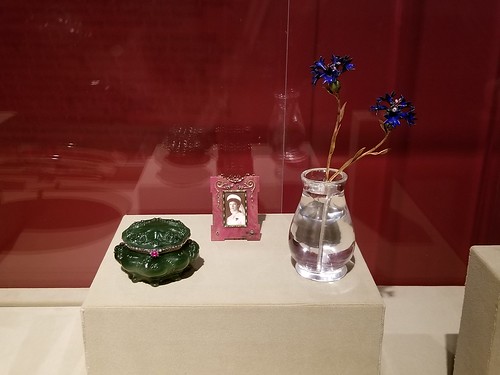