Home from NYC to cats pretending that they were not fed several times by our neighbor Rose, who undoubtedly had a warmer day than we did -- it was below 10 degrees when we left the hotel! Fortunately we didn't have far to walk, since we went to Maison Kayser for eggs and magnificent chocolate almond croissants, then to the New York Historical Society for the Harry Potter: A History of Magic exhibit, though we also spent a lot of time in the Gallery of Tiffany Lamps and stopped into several other exhibits (sadly, the magnificent library was closed).

We walked by several restaurants but decided to go to Sala Thai for lunch, partly because it had a mix of vegetarian and non-vegetarian food for our mixed group and partly because we were all in the mood for something hot and spicy on this bitterly cold day. Then we drove home, stopping at the Maryland House to stretch our legs. Once we arrived, after sorting laundry and all that, we watched Brexit, which I know is controversial but is also quite engaging as entertainment, with some of the same good and bad points as Vice where propaganda is concerned. 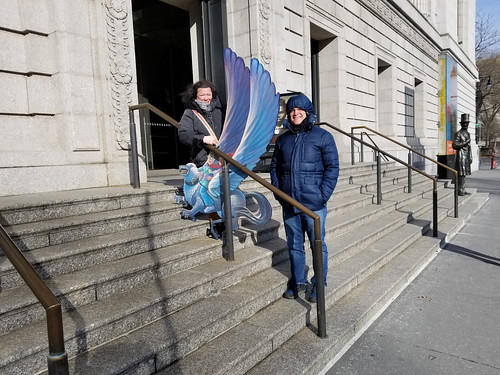